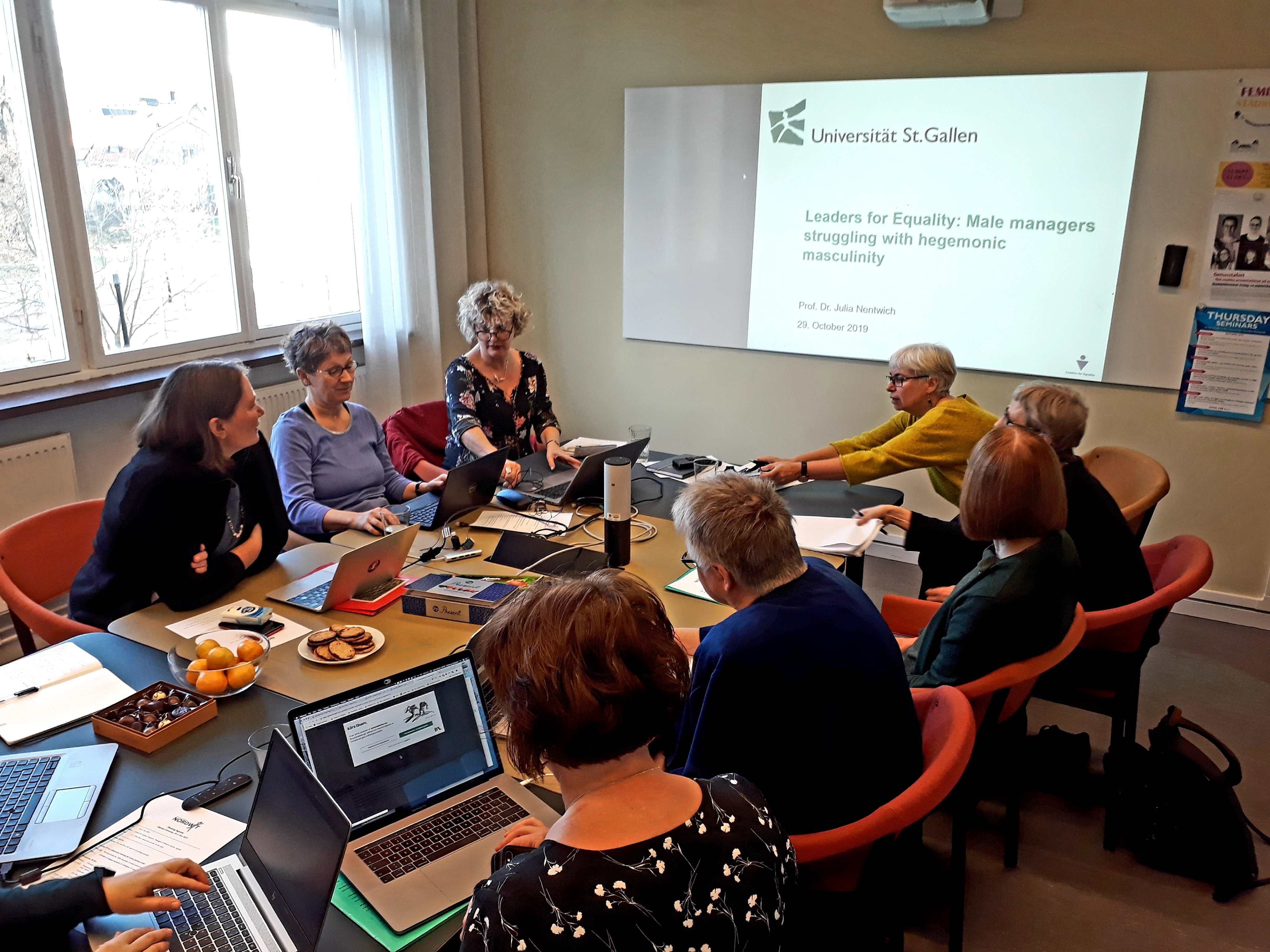 We have just had our annual Nordwit Centre meeting which also involves our Scientific Advisory Board members Prof Yvonne Benschop (Radebout), Prof Julia Nentwich (St Gallen) and Prof Thorgerdur Einarsdottir (Reykjavik). We had asked these first-rate people to give a 20-minute talk of their work in progress – and we had such lively and interesting discussions following on from this that we spent significantly more time than we had intended on this. They talked eloquently and wittily about ‘Gender practices in recruitment and selection of early career researchers’ (Benschop), ‘Leaders of equality: Male managers struggling with hegemonic masculinity’ (Nentwich), and ‘Gendering the money: GARCIA & ACT’ (Einarsdottir). Distinguishing between gendered practices and the gendering of practices, Yvonne showed how easy it is to introduce gender bias through how male and female candidates are treated differently in the post-interview discussions of the interview committee where, even when 6 selection committees had expressed preferences for appointing a woman, still 5 out of 6 appointed a man. Julia discussed how difficult men who profess to champion equality find it to deal with hegemonic masculinities, their own and others’. And Thorgerdur analysed how one might do gender budgeting in different and revealing ways. We all loved the talks and discussions formats, and are going to continue this – even if gender equality seems worryingly elusive. Still: steady drip hollows the stone!

In the beginning of this month, I participated in a Triple Helix workshop called “Soft Sciences Boosting SMEs’ business” at Tampere University. Triple Helix refers to a model where innovation becomes generated through the collaboration between research institutes, public sector and industry. In the workshop, the distinguished Triple Helix scholar Professor Henry Etzkowitz from Standford University explained how the model had started in USA with strong emphases on technology. He continued that recently there has been more and more interest in a collaboration where scholars from human and social sciences as well as artists would work together with other two helixes. Though the need for a new kind of cooperation is noticed the money is still often channeled to the STEM fields.

The workshop continued with a panel discussion where Etzkowitz was joined by Johanna Kujala from Tampere University, Seppo Haataja from the city of Tampere, and Jesse Wessman from local intermediary organization Demola. They highlighted the advantages of Finnish society and culture for multi-sectorial cooperation, namely high trust and low barriers between institutions and organizational actors. They saw Tampere, which is a middle-sized Finnish city with 250 000 inhabitants, as big enough place for R&I collaboration and simultaneously small enough place to be agile in competition.

From Nordwit’s perspective this is an interesting Nordic aspect that we consider in our studies especially since some of our interviewees in Tampere from R&I argue that in local circles the same R&I people meet over and over again. In the workshop, the panel moderator Markku Sotarauta stated that the high-trust in Nordic countries can lead to deadlocks both in thinking and in practices. In Nordwit, we continue this discussion by asking what kinds of gender impacts our local Triple Helix contexts and histories create, and how do they affect women’s career trajectories. As Malin and Monica Lindberg and Johann Packendorff (2014, 95) write “Triple Helix innovation systems tend to emphasise and sustain traditional masculine notions of entrepreneurship and innovation―not least since publicly supported Triple Helix initiatives also tend to be situated within the male-dominated settings of networks and industries.”

Lindberg, Malin, Lindberg, Monica & Packendorff, Johann 2014: Quadruple Helix as a Way to Bridge the Gender Gap in Entrepreneurship: The Case of an Innovation System Project in the Baltic Sea Region. Journal of Knowledge Economy 5: 94–113.

One of my recent reads has been Kai Strittmatter’s We Have Been Harmonized: Life in China’s Surveillance State (Exeter: Old Street Publishing, 2019). It provides an illuminaring account of how China as a state uses new technologies and social media to ‘harmonize’ its citizens by clamping down on their online activities, including long lists of words are forbidden to be used in social media, for example, etc. We Have Been Harmonized reminds us of the uses and abuses to which online media can be put. In western countries such as Sweden we do not escape such surveillance, but our relatively high-trust environments lead us to assume that little or no harm will come our way from the commercialized (and state) surveillance we already submit to, and which we see evidenced in the ads directed at us when we go online. The point: more critical digitality is necessary to enable all of us to take a more critical stance towards our online lives and to, for example,the acceptance of cookies that we are now always asked to agree to, and which we frequently do, without having read what we are actually agreeing to.

Involving more women in ICT is important for many reasons, and one of them is the growing importance of ICT competence across sectors and industries. ICT specialists are on top of the EU’s skills-shortage list, and the low proportion of women choosing ICT education and work has been identified as one of the reasons for a growing gap between demand and supply of ICT specialists (EIGE). This is the case also for Norway, where women make up less than 25% of ICT specialists.

We wanted to know more about how companies and employers for ICT specialists in Norway work with gender equality and improving the gender balance in ICT. We invited 12 organizations from different sectors and industries that had in common that they were all involved in ICT research, development and innovation, to meetings for discussing gender equality in ICT work. None of the organizations had many female ICT specialists (some had none), and they all recognized the need to recruit women to ICT. But we also observed many alternative ways of seeing the situation. We experienced some of these alternative ways of understanding the situation (few women in ICT), the goal (more women in ICT) and the explanations that followed, as a form of “resistance”. END_OF_DOCUMENT_TOKEN_TO_BE_REPLACED

Feminist Encounters is a UK based, peer reviewed, international journal. Its final issue in 2021 will be titled ‘Feminist encounters in research and innovation’, and a call will go out in early 2020 for papers under this heading. The journal allows a generous 8000-9000 words all-in per article and we shall be looking for around 10-12 contributions.

Time to start thinking about your contribution!