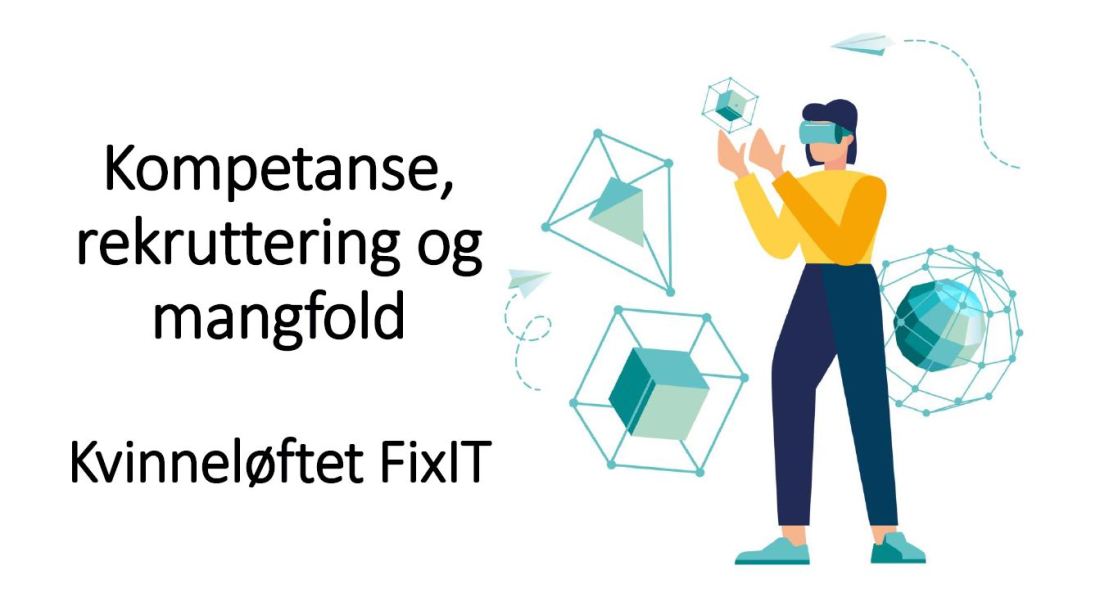 Last week we ended a project that has been working in close collaboration with Nordwit in Norway: FixIT – a project that has developed and organised activities to increase women’s participation in innovation projects. We developed a “gender balance competence package” for increasing awareness of and knowledge about gendered structures in research and innovation, with a brochure with guidance and tools for organizations to work towards gender balance. A balance competence course offered to innovation actors from private and public sector.

This of course, required knowledge, and this is what Nordwit provided: research-based knowledge about women’s experiences in the field of tech-driven R&I as well as organizations’ and employers’ attitudes and strategies for increasing women’s participation in this field.

Our Nordwit research in the western region of Norway has given a lot of important insights in how women are included and excluded from this field. However, one thing is doing research, trying to understand why there are more men than women in tech-driven R&I. A quite different task is to get out there and trying to make the actors in the field start behaving in ways that give another result for the gender balance – a challenge we felt strongly in FixIT.

It’s not enough just telling people what’s wrong and how to fix it, in particular when talking about gender balance, because we have a strong notion of gender equality already being installed in Norway. We have seen examples of this “myth about gender equality” making organizations argue that “we already have gender equality in our company”, even when there were no women in the tech-development group. This illustrates one of the most challenging messages to communicate: we are so used to seeing a male dominated tech-related education and working life that we certainly know that there are few women, but we do not see this as a gender imbalance. Instead we trust the gender equality myth, while gender difference in IT is rather ascribed a difference in men and women’s interests or even different natures.

One of our tools for making people aware that this installs a blindness to gender inequality is to tell the story about the women pioneers in programming, developing programming languages and working in the software industry in the 1950s and 60s in larger numbers than today – stories that have largely been “forgotten”. Such stories suggest that the modern understanding of IT as a field for boys and men has competition in narratives about women’s high degree of interest and competence in IT.

This is one way of illustrating how gender imbalance in IT R&I today can be visible (we recognize it) and invisible (we don’t consider it something to fix) at the same time. This in/visibility is based on a static and unchangeable image (or co-construction) of gender and technology. Recognizing women’s participation in IT in the 40s, 50s and 60s suggests that there are other ways of understanding this situation, including seeing women as indeed interested and competent in IT. In other words, the situation today should not be considered a reflection of men and women’s natures, but rather a cultural construction, thus, suggesting that “You don’t see it if you don’t believe it“. We cannot recognize the gender imbalance as something that can be changed unless we really believe that a different situation is possible to imagine.

Ending FixIT last week we made an overview of all the people, organizations, institutions, NGOs and others that we have met in this work over that last one and a half year. This has been a great way for us to reach a wider audience with knowledge built in Nordwit.